With the tandem in the train to the Upper Palatinate

The biggest organizational challenge on our vacations is usually the arrival/return trip.

After the good experiences in the spring, we are now traveling with the tandem to Germany in the summer.

Since changing trains with our luggage is usually not so fun, we are looking for destinations where we do not have to change trains too often.

Looking for accessible and attractive travel destinations from where we can cycle back to Switzerland, we found the Bavarian Forest.

With changes in Zurich and Munich, Weiden in der Oberpfalz was then also an easily accessible destination.

As luck would have it, we even had an Interregio on the journey from Bern to Zurich, which ended in Zurich on the track where the Eurocity to Munich then departed. Thus, in Zurich, the laborious change from the underground station to the normal tracks via several escalators was eliminated.

When boarding the Eurocity, we had to fight hard for our bike seats, despite reservations, because other travelers wanted to use them for their suitcases. Our recumbent tandem could be folded and hung on the two hooks next to each other without any problems. Underneath we could stow the trailer and the seats, so that only the bags had to go into the compartment.

The train was so full that reservations for our seats and bikes were necessary. Once again, the BLS travel office in Gümligen supported us very well, ensuring that we had two adjacent bike seats (otherwise it would be difficult with the folded tandem...) and also that our seats were not far from the bike.

In Munich, thanks to more than an hour of waiting time, we could comfortably change to the connecting train to Weiden, where boarding was more comfortable than in the Eurocity thanks to low-floor cars.

Arrived in Weiden, we made ourselves ready to ride. Since we have to screw the tandem back together and mount the seats, this usually takes 10-15min until it is ready. ( The dismantling and folding is feasible in just under 5min ). 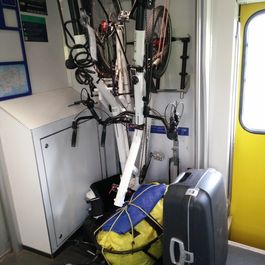 Our second tandem is here!

From the Upper Palatinate to the Bavarian Forest